Where to buy?
Overview

The M2 is a multi-media audio distribution system which offers an unseen flexibility and amount of possibilities for any audio distribution system. It can handle a diverse array of input signals and has enough DSP power to apply the most modern filters, effects and other options. In general, the M2 is an 9 x 8 digital audio mixer, which is based on 11 powerful DSP processors. It is fully digitally controllable through a web browser interface, optional touchscreen display, wall panels and Android or IOS apps. Using the freely available AUDAC Touch™ application for smart devices guarantees total system control and configuration from any device on any location and at any time. The built-in digital mixer makes it possible to mix all input signals together and patch them to any of the outputs. What makes the M2 superior to all other digital audio matrixes is the superior DSP power and advanced software. It contains 8 balanced stereo inputs with Automatic Level Control (ALC) where to any Line or Microphone level source can be connected. Other functions which can be applied to the inputs are: Noise Gate, Filters, 5 Band Parametric EQ, and Phantom power. The zone outputs are balanced stereo outputs with the possibility to integrate an optional Power Amplifier Kit (POW2). The outputs are switchable between Mono / Stereo and also have the possibility to apply many other functions such as Delay, Restricting the audio level, 5-Band Parametric EQ and Filters. Together with the audio outputs, one output relay (NO / NC contacts) is provided for every zone. This can be used for controlling external devices such as emergency lights, bypassing volume controllers, ... All audio inputs can be mixed to the outputs. To keep a clear overview of all these functions, they can be grouped to different scenes. With these scenes, it will be possible to recall all the right settings by one single action. Some of the many other features are: 10 programmable contract inputs, 256 Pre-programmed events, fiber optical interface (option), 7” Touchscreen display kit (option), ... The AUDAC APM paging tables are designed to create a powerful and flexible paging solution in combination with the M2.
Note: The AUDAC M2DIS interactive 7" touch-screen display kit shown on some promotional images of the M2 is an optional expansion kit not included in the standard M2. 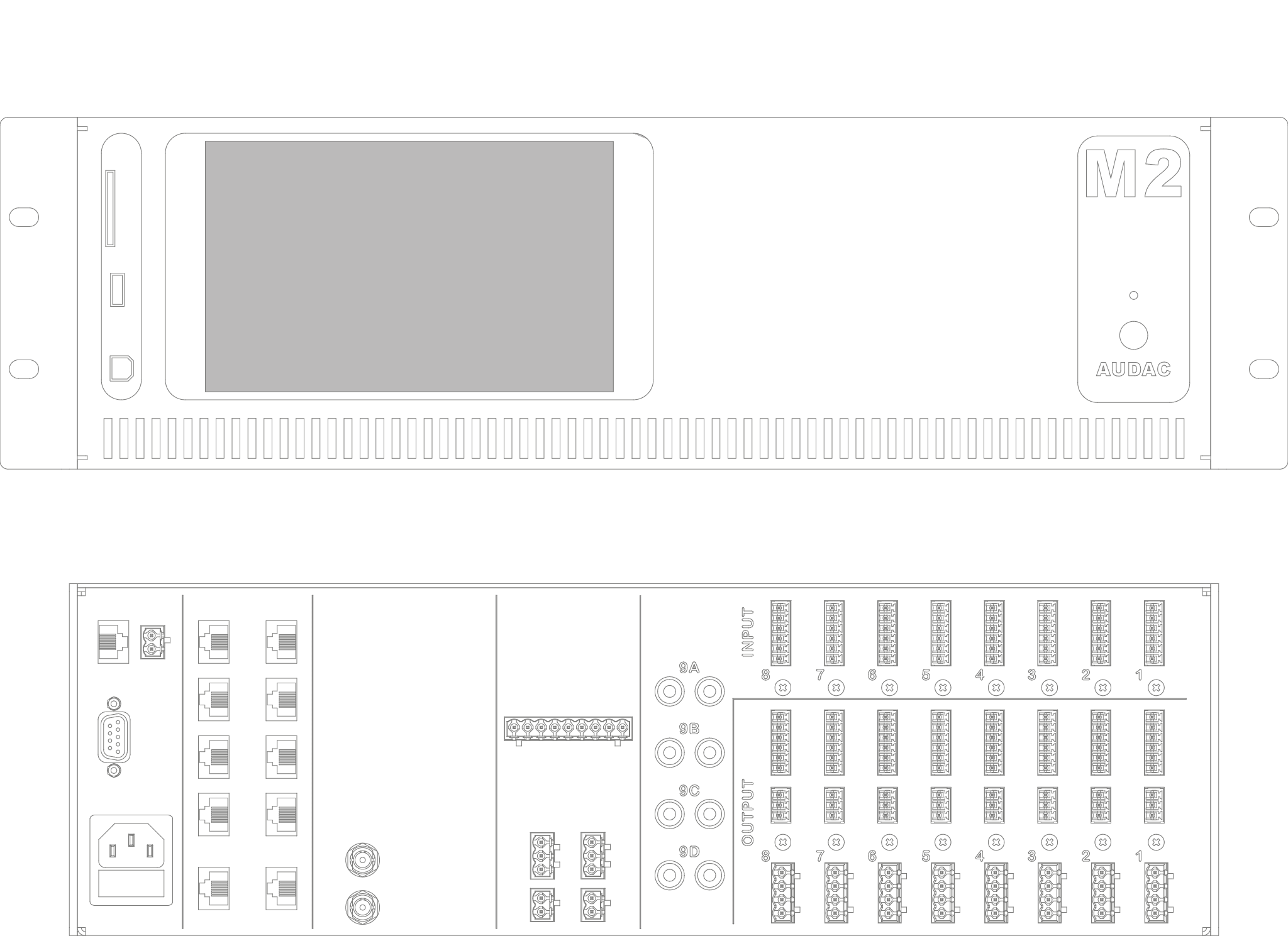 The following figure shows an example of how an M2 could be used in a residential application. Sources such as a XMP44 Professional modular audio system are available. The M2 is controllable using one of the multiple wall panels or, wirelessly, through the Audac Touch app or web interface. In this example the integrated voice file is being used as a doorbell. 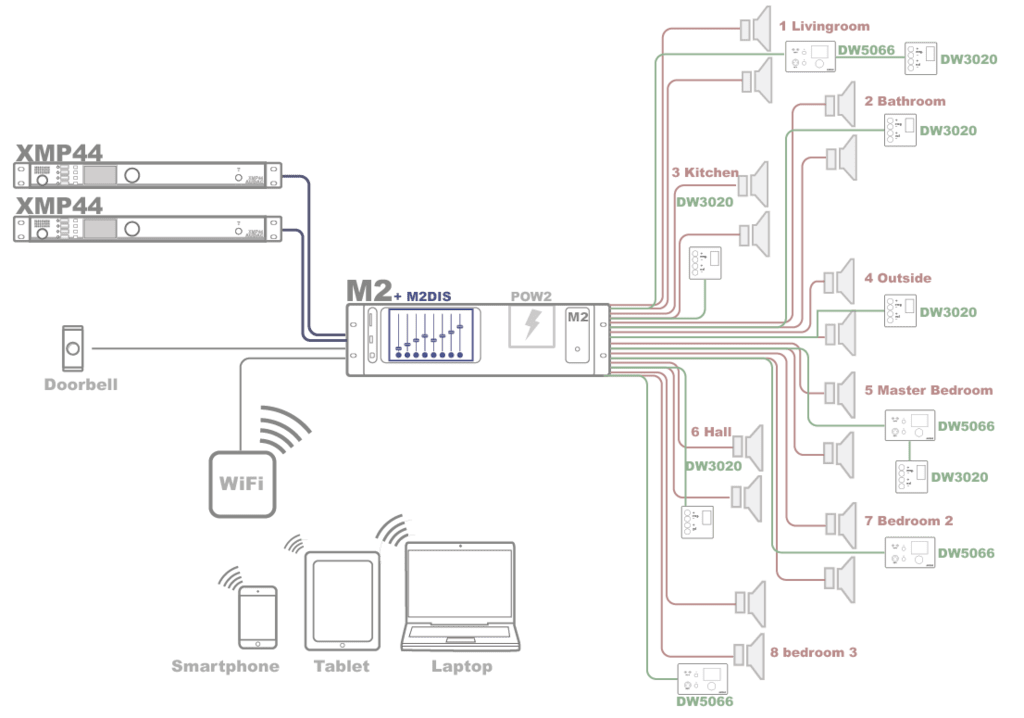 Below we can see an example setup using three matrix units in a medium-sized business.

First of all there is the main offices building with its own matrix, four XMP44 Professional modular audio system. Each zone in the building has its own local DW5066 wall panel for adjusting their zone settings according to their own preference or adding their own music sources to the system. A paging console is positioned near the front desk.

The warehouse has paging consoles setup across the building for easy communication between various parts of the supply and processing chain. Paging calls can be made globally or to specific departments. Local music choice and volume can be edited using DW3020 panels.

Finally the meeting room and its surrounding offices have a more advanced setup. Not only does the room have a powered M2 connected with two wall panels and a microphone, a paging console is also setup to control lighting, projection and window blinds using an ARJ and ARU relay system. Computers throughout the building allow authorised personnel to access the matrix unit's advanced options. 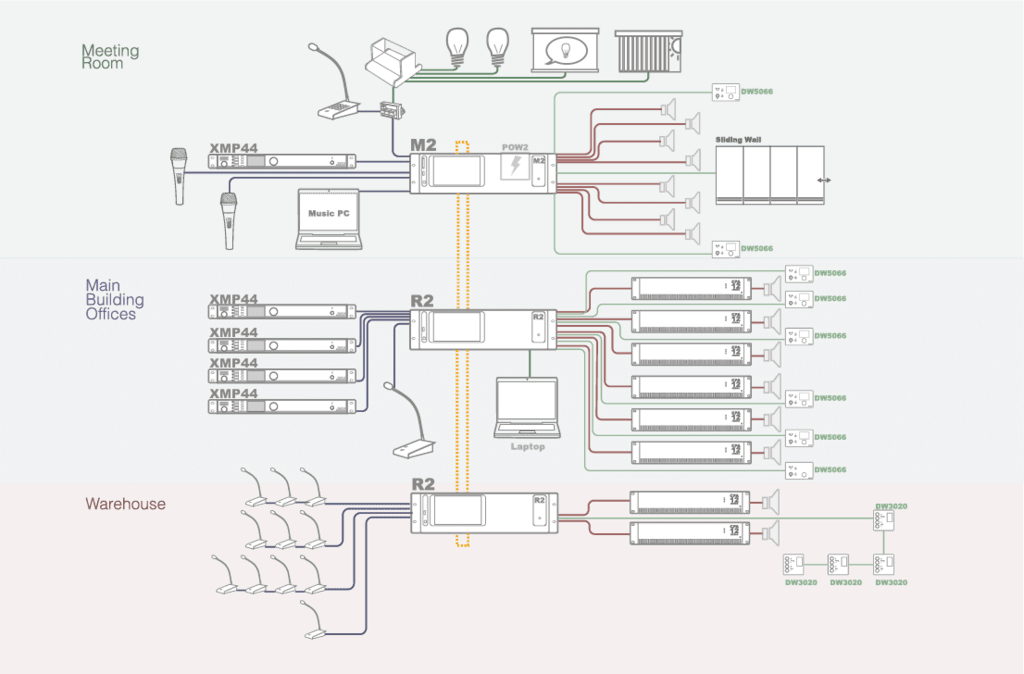 The M2’s on-board processor is equipped with automatic gain control functionality allowing the sources level to be adjusted in different ways. One possibility configures a maximum input level and reduces it when exceeding the configured level. Another option is to configure a fixed level whereby the gain is dynamically controlled so a constant output volume is achieved. This is ideal for applications with various audio sources or when radio stations with different levels are connected. This function can also be configured as a noise gate reducing hum and feedback which cuts the signal when not in use.

Microphones connected to the M2 using one of its 8 balanced inputs can benefit from the M2’s signal processing to reduce or eliminate feedback. With a flexible system such as the M2, it is important that it can be used to its full potential without feedback. For example, when a microphone is connected for an unannounced speech, you no longer have to worry about unwanted feedback. The M2 makes sure that the speaker only has to focus on his speech.

The M2 allows any number of inputs to be mixed, letting you combine one or multiple microphones with other audio sources in a single zone. The talk over function even dynamically lowers the volume for a certain source when other selected sources are activated. For instance by having the music level lowered when a microphone is in use.

Prerecorded messages and signals can be played directly from the SD card slot on the front of the unit and recalled by either timed actions, triggered actions or control buttons such as those on an AUDAC APM paging console. This can be used for applications such as an automatically triggered doorbell or evacuation.

Playing intelligible audio messages in exceptionally large spaces calls for specialized measures and the M2 is up to the task. In large venues such as arenas or train stations, sound often takes over a second to reach its audience. By using a custom delay, the M2 can assure that each zone plays with a progressive delay, assuring that your message comes across, even to the people in the back.

Link in- and outputs

An optional link in- and output allows connection of multiple matrix systems in cascade. This way, audio channels can be transmitted over fiber and installations can be extended over large distances (optional OPT2).

Two priority audio inputs are provided, as well as 2+8 input contacts which can be used for triggering a wide variety of actions such as playing voice file messages or recalling mixing presets (scenes, ...).

The M2 offers 8 balanced stereo inputs that are all software selectable between line and microphone level. A 9th input can be selected from 4 stereo line inputs, useful for switching between multiple sources with a single application such as video or radio.
The M2 also offers a relay output with NO and NC contacts for each of the 8 output zones. These can be used for bypassing analog volume controllers and much more such as activating emergency lights when a message is played, powering up beamers or operating automated curtains.
When the optional power amplifier kit is installed, each zone has an amplified stereo audio output with a power of 2 x 60W at 4Ω.

Noise Gate:
The inputs of the M2 have a noise gate (which can be enabled by software). This noise gate will mute the inputs automatically when the level is below a certain level. This can be useful to eliminate unwanted noise, hum or background noise when a microphone is connected which isn't being used at a certain moment.

Mic/Line pre-sets:
Because of the many input settings and possibilities, a preset for mic and a preset for line sources is implemented. These presets will enable the ALC and noise gate with the correct settings. A high pass input filter will also be enabled when the mic preset is chosen. These presets can always be overruled by manual settings.

Mono/Stereo:
A mono-stereo selection switch will be enabled on the inputs. This should be used when for example a Mono microphone is connected. When the mono switch is enabled, the signal applied on the left channel will be copied to the right channel.

3/5 band EQ:
Each input contains a Three or Five (selectable) parametric EQ to adjust the input signal. The frequencies, levels and bandwidth are adjustable.

48V Phantom:
Every input contains the possibility to enable 48 Volt phantom power, for powering condenser microphones. This phantom power can be enabled in the software.

Outputs
Delay:
A delay can be enabled on all the outputs of the M2. The delay is selectable between 0 ms and 2000 ms.

Mono/Stereo on outputs:
Mono / Stereo switching can be done on all the outputs of the M2. When switched to Mono, the left and right channels will be mixed to one signal and are available on both left & right output channels.

Max Volume:
The maximum output volume can be selected. This way, a limiter will be applied to the outputs, making sure that the volume can't exceed a certain volume level.

5 band EQ on outputs:
Each output will have a 5-band parametric EQ whereby the signal can be adjusted to the acoustics of the room. The frequencies, bandwidth and level of the EQ are adjustable. In addition to the 5-Band EQ, there is still the two band tone control on the outputs.

Mixing:
Multiple input channels can be mixed to one output.

Relay (NO/NC):
Every channel contains a relay output with both NO and NC contacts. These can be triggered by contact, pre-defined timer events, paging call, etc. and can be used to control all different kinds of external devices. Some examples are overruling of manual 100 Volt volume controllers (24 Volt), enabling of emergency lights, ...

Auto mixing:
Auto mixing will allow you to automatically mix predefined inputs together and prevents the output volume to become too high. The mixing levels will be adjusted automatically depending of the triggered inputs.

Contact inputs:
The contact inputs can be used to trigger priorities, voice-file messages, output linking and scenes. Extra features can be implemented in the future.

The voice files can be triggered by one of the contact inputs of the M2 (by contact closure), and / or by pre-programmed timer scheduled events.

Up to 16 different configurations for voice files can be made, and the maximum duration for one message can go up to several hours.

Any product that is updatable by the AUDAC system manager is automatically discovered and downloaded to your personal computer.

All other software versions can be found via audac.eu/software

Previous firmware versions can be found in the portal on the support tab.

Yes, it is always recommended to run the latest firmware to be compatible with AT2.

Please download the AUDAC system manger. This will scan your network and tell you the IP address of all AUDAC products within your network.

If your network is blocking global broadcasts, you can connect directly by using a cross cable. The system manager will still be able to inform you of the device IP.

When unsure which method to use, please refer the product manual.

When connecting directly to the product,

When connecting to your product via network

When trying to connect with a personal media device.

It is possible to place different R2 and M2 units on different locations in separate buildings. This solution can be useful when the audio system from a factory should be linked between different production plants and/or office buildings.
The control of these matrix systems (multiple linked with each other) can be done through the web-based user interface on two different ways.

This depends of the kind of wall panel you are using.

Please refer to the product manuals for the detail connection possibilities for each matrix.

Yes, the RS232 can be controlled by any device supporting RS232. Some examples are: a computer, home and industrial automation systems like AMX and Crestron. The command set for controlling the devices over RS232 is downloadable here.

The AUDAC Education Platform lets you feel like you are participating in a real life innovative sound training hosted by one of our AUDAC specialists.

Where to find M2

Stay up to date with our activities